AN INTERVIEW WITH DR. MAHMOUD EL-SAIED EL-DOGHIM, RESEARCHER AT CENTER OF MIDDLE EAST AND AFRICA STUDIES 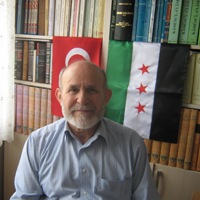 AN INTERVIEW WITH DR. MAHMOUD EL-SAIED EL-DOGHIM, RESEARCHER AT CENTER OF MIDDLE EAST AND AFRICA STUDIES
******
Dr. MAHMOUD EL-SAIED EL-DOGHIM, is one of the prominent political scientists of Syria known on the international platform and having studies. Living in Turkey for many years, Seyitoğlu focused on fighting against the Syrian regime by suspending his academic studies upon the start of popular uprising in Syria. During the interview we carried out with Seyitoğlu we talked about the process in Syria, the status of Syrian opposition, possible scenarios and Turkey's Syria policy.

ORSAM: First of all, could you introduce yourself in brief?

I am DR. MAHMOUD EL-SAIED EL-DOGHIM,: I am a researcher in the Center of Islamic Studies at University of London. I studied university in Lebanon. And I started my masters degree in Lebanon as well, but I could not finish it because of the war at that period. I finished my PhD in the UK. I went to war in 1973 in Syria, I received two badges. And I studied in academy for 4 years. I brought many prisoners of war. After the revolution started, I quit all my jobs and totally focused on the revolution.

How do you assess the underlying causes and the future of the uprising in Syria?

None of the parties launched this revolution. Whichever political groups claims “I launched this revolution”, it would be a lie. This revolution emerged in Tunisia. Following the events taking place in Tunisia, before the uprising spread into Syria, I stated on television that “The Syrian revolution will happen soon. If Assad acts same as Ben Ali, it will be a bloodless revolution; otherwise a bloody revolution process will take place, and it will be a new Iraq”. This revolution was launched in Daraa province with children. Children wrote on the walls, then the intelligence came to arrest them and tortured them to death. First of all Daraa rose up, then Banias. Then Hama started, and it spread to Idlib. The revolution still continues. The real commanders of the revolution are martyrs. Someone is martyred and people attend the funeral. Then the regime shoots the people attending the funeral. This time many more people are martyrized. The people absolutely act upon blood shed. In the past, there used to be some problems between certain villages and they never reunited. However, today, people are martyrized from both villages and they cry together. The commanders of this revolution are martyrs. All other segments abuse these martyrs.

Could you inform us about the way the political and military opposition is organized inside?

Not a party or an organization, but all segments excluded from the system rise up. It is as simple as that. Who helps them, who provides them with weapon? Some soldiers leave the army along with their weapons. Sometimes, they even seize armories and then leave. There are people inside meeting their daily needs. These are anonymous people, but they give support inside. Most of the support comes from inside. None of the states have sent any help so far. Neither a sum of money not weapon has been given. Not Turkey either.

What do you think about the position of minority groups?

The Kurdish have not taken part in the revolution so far. The Christians have not involved in it either. Druses are silent and they keep waiting. Druses think they are weak and they keep silent not to get harmed. Alawites, on the other hand, stand by the regime. Nevertheless, there is a constant effort to spread terror regarding a civil war will break out if the regime is toppled. These groups have already been living together for many centuries. If there had been a problem among these groups, it would have taken place in Ottoman period. The majority of the Syrian are Muslims, and Muslims always accept others.

How much longer do you think Damascus can stand?

As a matter of fact, the Syrian regime receives a wide range of supports from outside. The regime is provided with money, arms, and military aids especially by Iran. In the past, air planes passed over Turkey. Right now, they come through Iraq. It is known that Hezbollah also helps. Russia's support is obvious. Thus, Iran is in the war, Russia is in the war. It is known that Iraq has been providing large amount of financial aid. The uprising people, on the other hand, have not been supported by any state so far. They have been supported only in discourse. But it is not a solution, not a support. Another kind of support is needed in wartime. The entrance in Syria through the borders is very few. The people provide all their resources completely from inside.

There are many martyrs, injured, poor people and revolutionists inside. These people are in need of many things. And they need large amount of money per month in order to fulfill these needs. These financial aids are only for humanitarian purpose; such as medicament, food, and other necessaries. If the internal organizations are provided with support, they will further resist against the regime. For instance, organization in Homs is more powerful compared to others. Because the ones in Homs received better support from the people in Homs. This is the case in Homs, Bab Amr and in Rastan.

Turkey is quite good in terms of discourse. They welcomed refugees, and we are grateful in this respect. However, there is such an equation. On one hand, there is Turkey; and Iran, on the other hand. It should be considered this way :What Iran does, and what Turkey does. How Iran supports, and how Turkey supports. “I support the people,” says Turkey; and “I support the regime,” says Iran. But right now, how Iran supports the regime, and how Turkey supports the people. There is a war going on in Syria. My friend is not sending a bullet. However, their friend sends everything; money, food, weapon. Iran supports them in every aspect. But our friend does not act like Iran. It is our right. In the past, we made war in the Ottoman army. We were martyrized in Iraq, Yemen, Çanakkale. Our history is obvious. Turkey can do a lot more. In accordance with the Adana Agreement, the Turkish army has authority in 5 km inside the Syrian border. Now Turkey will say that I have right in accordance with this agreement, and you cannot enter 5 km inside. Give this region to the opposition. Then, real opponents and the people escaping from massacres can take refuge in this region. We ask for a safe zone. It is a right for Turkey in accordance with the Adana Agreement. If Turkey severely holds this area, the Syrian army cannot enter this area. We do not ask for weapon, soldier or money from Turkey. We ask for this 5 km. As it is seen today, the Syrian people are ready to give everything. They do not need anything else except for this safe zone.
Dr. Mahmoud, thank you very much.

* This interview was carried out by ORSAM Middle East Specialist Oytun Orhan in İstanbul, on 22 February 2012.